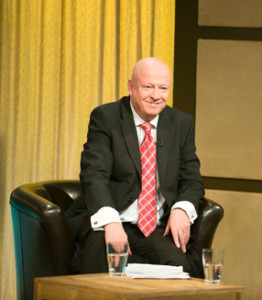 On the other side of the cameras, Rob is a leading producer and television executive.

He is a former Board Director of Granada TV and was an Advisor to Granada and ITV plc from 1998 to 2008.

Rob has devised and produced programmes for all the leading UK terrestrial and satellite channels including a special on Morecambe and Wise for BBC 1.  He recently revived the iconic music show The Tube for Channel 4’s digital radio experiment.

His documentary film series Eye on the World (Discovery/S4CI) covered the role of the camera in warfare, medicine and entertainment, and has sold across the globe.

Rob created and co-founded Hasgrove plc which did increase shareholder value by 457% within a year of flotation in 2006. multi-national and multi layered as a communications group it employed more than 360 people in 6 countries and saw turnover soar to £36m. It turned around the digital agency AMAZE and owned Interel SA based in Brussels, Paris, Prague and later Berlin and London. Hasgrove de-listed after the multi million pounds sale of AMAZE and Rob remained Deputy Chairman till 2008. He has advised a range of companies in digital, sports, leisure and the media.