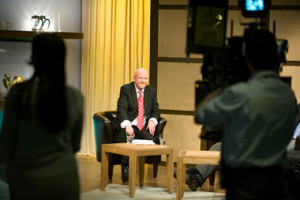 Rob began his professional TV career on ITV as part of the award winning news magazine Granada Reports team alongside Richard and Judy, Tony Wilson and ‘Mr Granada’ the hugely popular Bob Greaves. Rob became a Reporter, Producer, Deputy Editor of News and returned as a guest presenter in the 1990s. As producer in 1989-1991 alongside Jeff Anderson- ratings grew over 14 months from a low of 12% to a startling 55% ahead of the franchise renewal for Granada TV. He relaunched Granada Reports (it had been renamed Granada Tonight in 1990) with Lucy Meacock in 2001. The new double headed format increased audiences.

Prior to joining Granada, Rob was a graduate trainee with Radio City in Liverpool and was sponsored through the post-grad Centre for Journalism Studies at University College Cardiff where he made 2 TV documentaries: Northern Ireland: Are We Told The Truth? which was screened at the Edinburgh TV Festival and Ely – A Community Fights Back which led to a Guardian investigation and a Daily Star front page exclusive.

Rob was a World in Action investigator and ITN Reporter and hosted the lively – and often controversial – politics and current affairs show Party People for ITV Granada for over 10 years. Rob also presented its forerunners The Sunday Supplement and The Line. He presented the ground-breaking series The Spin, which covered politics, the media and PR. He has hosted Election Specials on ITV since 1994 and is the channel’s longest serving political presenter.  He fronted the first text-led Question Time style programme The Last Word.

In the run-up to the 2015 General Election he presented Exclusive interviews for ITV’s Party People with the Prime Minister David Cameron, Chancellor George Osborne, UKIP’s Nigel Farage and later broke the exclusive story that former Militant Leader Derek Hatton had rejoined Labour. He followed up with a special on counter terrorism with the new Security Minister John Hayes MP.

Rob has a witty and engaging manner which, combined with a great depth of knowledge, makes him a formidable interviewer. He has been described as “one of the most respected interviewers on TV; respected by interviewees – despite a sometimes penetrating and relentless style on political interviews – colleagues and audiences”.