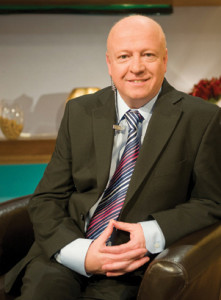 A multi-award winning Broadcaster, Producer and Creator he is best known as the face of politics and elections as well as news and current affairs on Granada Television (later ITV Granada) and as the creator of The Virtual Grand National.

He was an Investigator on the BAFTA winning World in Action (ITV Current Affairs series); hosted his own commercial radio Talk and Entertainment Show, worked for ITN, broken major exclusives across Granada Reports, Granada News, News at Ten, Channel 4 News, Sky News and the press as well as picking up Scoop Of The Year in the O2 Media Awards for an ITV Political Special before being appointed an OBE for Services to Broadcasting.

A former Board Director and later Advisor to Granada Television/Granada Media Group and ITV plc, he has created his own successful media businesses including Hasgrove plc which increased shareholder value by 457% on flotation and turned around and sold the acclaimed digital marketing business Amaze.

Rob has campaigned for the North and UK’s media sector. Uniquely he united The Halle Orchestra with The Royal Liverpool Philharmonic Orchestra in an ITV/Classic FM spectacular which also included stars from opera, pop and celebrities such as Cilla Black and Barbara Dickson. He also masterminded Steps’ Number One hit ‘Tragedy’ for a Granada fundraiser as part of a tribute album to The Bee Gees.

In 2017 he launched The Virtual Grand National which uses CGI technology and special software to run the most popular race in the world ahead of the off. In 2020 The VGN replaced the real race on ITV and was watched by almost 5 million viewers (12.7 million in the UK with extended news highlights) and raised £2.9 million for NHS and Irish health charities. Within six weeks the NHS had raised £100m and they credit the programme with driving that figure and raising awareness that the public could donate centrally to the NHS.

He founded The Educate-North Awards which celebrates the success of the North’s world-class universities and colleges as well as searching for the next generation of entrepreneurs. The awards have been held annually since 2015 at a prestigious dinner in Manchester and supported by three popular radio stations: Heart (Yorkshire), Smooth (North West) and Smooth (North East).

Rob, through Carm Strategy, has advised private, charitable and other organisations in the UK, Europe and America on communications, political change and management reorganisations.