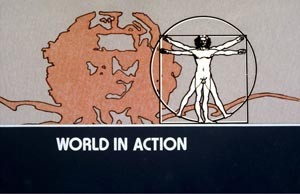 “The greatest current affairs programme in the world” – Jeremy Paxman on World in Action.

In 2013, ITV celebrated the 50th anniversary of the launch of the BAFTA winning and internationally acclaimed series World in Action.  This innovative series broke stories, took major journalistic risks and transformed the way current affairs was broadcast on British Television and worldwide.

Rob joined the acclaimed Granada TV series in 1988 and made five programmes for the long-running Monday night series which was a British TV institution from 1963 until 1998. As an investigator Rob made a series of programmes for the multi-award winning programme, watched by millions of viewers in the UK and abroad:

The Sex Slaves of Europe

Made in 1988, this was an exposé on enforced prostitution in the Netherlands. It features the infamous ‘dog attack’ as Rob approached a man convicted of being involved in the illegal trafficking of women into the Netherlands. (See Show Reel page.) It attracted 7.4m viewers on ITV and was praised in the press. It was produced by Debbie Christie and shot by the legendary George ‘Jessie’ Turner and John Curtis who was bitten by the dog.

The team were also forced into a 100 mph car chase across North Holland as they attempted to secretly film a ‘sex farm’; the people chasing had weapons but it’s not clear if they fired at a BMW driven at high speed by Rob.

This 1989 film was an exposé into corruption and mismanagement on the Trident nuclear programme at Aldermaston. It took 8 months to investigate and on transmission, it wiped £2.4bn from the share price of a major UK construction company and led to three House of Commons inquires. Watched by nearly 5m people on ITV, it was produced by Steve Boulton.

Rob recently revealed on BBC1 that his ‘mole’ (code name ‘Dennis’) attempted suicide before transmission but survived and was never prosecuted for giving information to the programme. A national newspaper revealed the identity of a ‘man’ which they claimed was the World in Action mole. Rob and the producers refused to comment.

Flight into the Unknown

Rob’s film on ageing aircraft made headlines across the globe after he revealed that a plane which had been an insurance write-off in Mexico was flying in Europe and the UK (produced by Charles Tremayne). Rob revealed pictures of the crashed plane and interviewed the man who had flown it after the crash.

This was a moving film (directed and produced by Brian Blake) about IRA punishment shootings in Northern Ireland. It was watched by 4.8m viewers in the UK and sprung from an idea about The Mater Hospital; the only Roman Catholic General Hospital in the NHS which serves the predominantly Protestant Shankill Road.

Rob also assisted with a special before he joined WIA on the 1985 Manchester Air Disaster (produced by John Ware) and a Stuart Prebble film on the UK’s Deputy Doctoring system of patient cover.

In 1988, Rob also hunted down Wilhelm Monkhe, the Nazi Chief implicated in the massacre of British soldiers in Belgium. The programme didn’t proceed but was made into a Cook Report by Central Television.

Rob also made a live World in Action Special on the Hillsborough Disaster which was presented by Mike Scott.

Rob’s first TV expose was at The Centre for Journalism Studies as a journalism student in Cardiff. Working with Anna Pukas (now Chief Feature Writer, Daily Express) they made a documentary called Ely – A Community Fights Back which exposed a scandal involving homeless children in the city. It led to an investigation by The Guardian and was broken as a front page lead in The Daily Star (1981).

A second documentary, Northern Ireland: Are We Told the Truth? was screened at the 1981 Edinburgh International TV Festival and highlighted censored broadcast TV programmes on The Troubles.

In 1983, Rob produced his first Granada Reports and News at Ten (ITN) exclusive on Peter Wilson who had wrongly spent 35 years inside the Special Hospital system (Rampton, Broadmoor and Moss Side) for being a juvenile delinquent. Wilson was released after a special appeals hearing and the story was broken across ITV in extended reports.

In 1985 (with the assistance of The Sunday Mirror) Rob obtained the log of the plane which crashed at Manchester Airport killing 54 people. He revealed that it showed ‘warning signs’ of a series of ‘risks’ highlighted by Boeing but which were ignored.

The Granada Reports exposé led to a John Ware World in Action.

In 1986, Rob produced exclusive after exclusive for Granada Television and ITN on the Stalker Affair (following the suspension of GMP’s Deputy Chief Constable, John Stalker) who was heading a ‘shoot-to-kill’ inquiry in Northern Ireland. An extended interview with Stella Stalker was first screened on News at Ten and the ten-minute full interview was shown on Granada Reports. It made headlines worldwide and put the programme’s name on the front pages.

He followed up with the first full-length 12 minute exclusive with John Stalker on the eve of a decision on his future.

It aired first on ITN’s News at 5.45 then in full on Granada Reports and in full on Channel 4 News (ITN). It made headlines across the world and was made available to the BBC.

In 1990, he made A Pawn in the Game (Granada Television) which revealed that GMP knew that Kevin Taylor, the businessman at the centre of the Stalker Affair, was ‘innocent’ before they removed John Stalker. It also revealed the extent that some officers went to in committing perjury.

In 1988, before joining World in Action, Rob forced two companies to pay out millions of pounds to clean up two ‘blue asbestos’ tips which posed a risk to the public in Derbyshire and West Yorkshire. It was a major coup for Granada Reports.

In 2007, he forced police forces in England and in France to re-open the investigation into Christopher Traynor who died in suspicious and unexplained circumstances in Paris in 2000. Rob traced a witness who had been ‘missing’ on the streets of Paris for six years who claimed that Christopher had been murdered.

He is currently working on a project about the food industry.

References to Rob’s work can be found in Stalker (the autobiography of John Stalker) and Stalker and The Press, an academic publication by David Murphy.

He is also extensively interviewed and quoted in David Nolan’s tribute to Tony Wilson: You’re Entitled to an Opinion and in Sir David Trippier’s memoirs; Lend me your Ears.