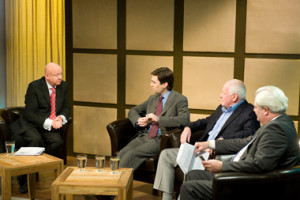 Rob hosted the first Weekend Breakfast programme on BBC Radio Five Live with Jane Garvey and he went on to lead the show to its early success at the start of the network. He also hosted Morning Reports and other news programmes as the station established itself as one of the BBC’s rising stars. Rob appeared on the BBC by arrangement with Granada Television.

Rob masterminded the return of the iconic music show ‘The Tube’ for Channel Four’s digital radio experience and uniquely has run major social action and awareness campaigns across ITV, BBC TV and BBC Radio as well as commercial radio.

He has appeared on a host of radio stations at home and abroad including BBC Radio Five Live, Radio City (where he launched his broadcasting career), City Talk, LBC, Capital, IRN, radio Scotland, Radio London, Radio Merseyside, RTE Radio One and others.

He is a sought after commentator on political and other issues, recently returning to BBC Breakfast which now boasts a daily audience of 7m people on BBC 1 and BBC News.