The Educate North Awards – the leading event for the University and Higher Education sector – returns on Thursday 25th April 2019, at The Hilton Hotel in Manchester.

The awards celebrate excellence and the world-class success of the North’s University and Higher Education sector as well as rewarding success in Further and Sixth Form Education. 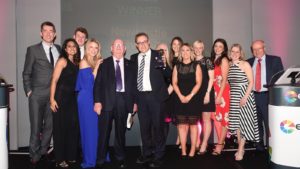 MAJOR FUNDRAISER NETS MORE THAN £450,000 IN ONE NIGHT PLUS AWARDS IN YORK AND LIVERPOOL FOR INNOVATION AND EXCELLENCE
The new Sir Howard Bernstein Charitable Foundation launched with a spectacular fundraising event in Manchester raising more than £450,000 in one night to help young Mancunians make it in the work place with special placements and opportunities.
The centre piece of the night was an in-depth video interview with Sir Howard and Rob McLoughlin which looked back at the highs and lows of the former Chief Executive’s career at the helm of Manchester City Council.
The official figure for the new foundation (part of The Lord Mayor’s We Love Manchester charity) will exceed more than £450k.
40% of that income was from a spectacular auction where Rob ‘sold off’ footballers, Nobel prize winning scientists and others as special prizes.
‘I think I sold Ryan Giggs and Gary Neville as lunch dates three times’ said Rob; ‘They’ll need even more exercise now but it was a spectacular night and a marvellous way to mark the legacy of Sir Howard who was also honoured with the unveiling of a street named after him at his beloved Etihad Stadium, home of Man.City’.
‘This is the most I think I ever helped raise in one night and it was wonderfully produced by Rachel Downey and the Town Hall team and Committee and wonderfully hosted by ITV Good Morning Britain’s Ranvir Singh’.
The event, in April, preceded the enormous fundraising by We Love Manchester and The British Red Cross following the tragic bombing of Manchester Arena.
In June, Rob hosted The Merseyside Innovation Awards at a special event in Liverpool alongside the new Metro Mayor Steve Rotherham.
This was his second year as host as companies competed for cash prizes and recognition for breakthroughs and new innovative approaches.
Earlier he encouraged four hundred guests to sing Happy Birthday to him  (twice) at Central Hall at The University of York as he presented The We Love York Awards to recognise student achievement at the University where Rob sits on The Court.  His birthday was the following day.
The singers didn’t include Jeremy Corbyn or Mrs May who were appearing live on BBC Question Time from the University at the sametime.
Rob returns to BBC Breakfast in September as a weekend guest.